Sometimes it’s hard to take something seriously that promises to solve an age-old, complex human problem. If a product or service promises to “Burn Off Pounds Fast!” or “Eliminate Stress Now!” most of us are, justifiably, skeptical.

The challenge of changing human behavior for positive business outcomes is a similarly elusive pursuit. That’s why I was skeptical when I first encountered BJ Fogg’s Behavior Wizard. The wizard uses a series of simple questions to help the user identify what kind of behavior change he or she is looking for. For example:

Based on the responses, the wizard assigns your behavior change into one of 15 types, divided along two axes:

This is a fascinating tool for those in the Learning and Performance Improvement industries, because it attempts to identify the objective and discreet attributes that characterize different kinds of behavior change. In this respect, it’s similar to Pandora, the popular on-line music streaming service, which promises to have “decoded the music genome” and plays music based on thousands of objective attributes such as major/minor keys, vocal type, and instrumentation.

While this kind of “genome for human behavior change” may not revolutionize the Learning and Performance Improvement industries, it does give us a handy language for describing these challenges.

Further, it can provide a framework for large-scale change projects within large organizations, like an ERP system change or business process change. Because the ability lever is just one of three, learning professionals can help their internal and external customers understand that training may not be a panacea for everything the customer wants. How many times have you salespeople blame their lack of CRM-tool usage on “insufficient training.” Chances are, those efforts also lacked sufficient triggers and motivations for the change.

Ultimately, by paying close attention to the kind of change they’re after, instructional designers and learning professionals can boast about their own sounds-too-good-to-be-true achievement: create learning and communication strategies that both produce immediate results, and stand the test of time. 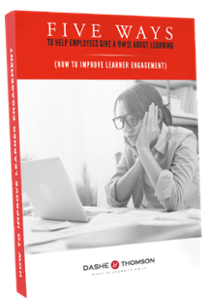